Above the Arroyo: A Dream of the Stairs of Los Angeles 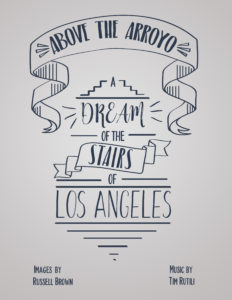 The encroachment of nature upon the city’s built surfaces, the artistry employed in construction, the mysterious essence of staircases, the visceral passage of time, and the distinctive beauty of Los Angeles are all visual themes explored over the course of this 82-minute tone poem.

Shot over the course of several months, filmmaker Russell Brown scouted more than 70 staircases, ultimately choosing 28 for their unique individual personalities and aesthetic qualities. Each staircase was then documented at a chosen time of day to showcase specific shadows and colors. He then employed a combination of horizontal and vertical stabilizing devices, as well as stabilizing filters, to create the drifting effect.

Composer Tim Rutili is a musician, filmmaker and visual artist and is founder and principal songwriter for Califone and Red Red Meat. He has composed and collaborated on music for many feature films and documentaries and contributed to albums by Loftus, Boxhead Ensemble, Ugly Casanova, Joan of Arc, Brian Reitzell, Modest Mouse, Sage Francis and Fruit Bats among many others. At select screenings, he will improvise new music to accompany the film. Above the Arroyo: A Dream of the Stairs of Los Angeles drifts backward down the hidden staircases of Los Angeles in a hypnotic and hallucinatory meditative adventure.