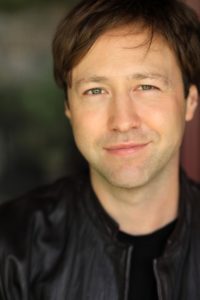 Russell Brown is currently editing Loren and Rose, starring Jacqueline Bisset and Kelly Blatz, featuring Gia Carides, Erin Cahill and Paul Sand. He is completing post-production on two nonfiction films — a short conceptual documentary entitled The 44 Scarves of Liza Minnelli and Above the Arroyo: A Dream of the Stairs of Los Angeles, a feature length art installation which includes a live performance component.

His most recently exhibited film — a mid-length documentary entitled The Kaleidoscope Guy at the Market — had its festival premiere at the 21st Dances with Films in June, 2018, and has played over 20 festivals since its premiere, winning multiple awards and garnering stellar reviews.

“The Kaleidoscope Guy at the Market introduces the viewer to an incredible artist in Michael Shaw. Thanks to Russell Brown’s slick direction and the vast array of kaleidoscope related topics the movie covers, it is a spellbinding, brilliant watch.” (Film Threat)

Brown’s fourth narrative feature, Search Engines, stars an ensemble cast including Joely Fisher, Connie Stevens, Daphne Zuniga, Natasha Gregson Wagner, Barry Watson and Michelle Hurd. It premiered at Cinequest and has played more than 60 festivals across the country, picking up over 25 awards in categories ranging from acting, directing and writing to audience awards and best picture recognition. It was released theatrically in October 2016, in select cities.

“Filmmaker Russell Brown clearly had something pertinent he wished to say about our plugged-in, tuned-out obsession with the Internet and was obviously going for a Luis Buñuel-Robert Altman style of social commentary.” (The Los Angeles Times)

His third feature film, Annie and the Gypsy, starring Cybill Shepherd, premiered at the Seattle Film Festival in June 2012. Osiris Entertainment distributed the film in Spring, 2013.

“Writer/director Russell Brown makes short, sharp films that investigate how and why friends treat each other badly… In Annie and the Gypsy, Brown’s most ambitious, and arguably most accomplished film to date, Brown provides a keenly-observed study of the title character (deftly played by Cybill Shepherd) who throws a Spanish-themed dinner party hoping to reconnect with Gordon, a man she loved in Spain decades ago.” (Film International)

The Blue Tooth Virgin, his second feature narrative, was released theatrically in the United States by Regent Releasing in September 2009. It won the Special Jury Prize at the Seattle International Film Festival in the New American Cinema competition. It continued to win multiple other prizes around the world for writing and acting.

“Hilarious, acutely knowing… Yet comedy enables Brown to dig into the art-industry equation that is the eternal Hollywood challenge, as well as questions about values, priorities, standards, goals — all leading to what is all-important: self-knowledge. It’s not too much to hazard that Billy Wilder would have enjoyed The Blue Tooth Virgin.” (Los Angeles Times)

“What’s striking, brilliant, and refreshing about this story is its sheer minimalist quality… And what dialogue it is! Beautiful and quotable, intriguing and challenging. There are so many great themes here, you truly wonder how writer/director Russell Brown will find something else to write about in future projects.” (MTV.com)

Race You to the Bottom was released theatrically in the United States in March 2007, by Here Films. The film played at festivals worldwide and earned a best actress award at Outfest.

“Brown’s screenplay and direction, both economical and unshowy, sketch character dynamics in crisp terms that resist the temptation to explain all, beg sympathy, or heighten drama for purely histrionic purposes.” (Variety)

Brown directed the educational program Karen Black: On Acting, a master class seminar with the iconic actress. The film has screened at festivals across the country and had its television premiere in August 2014, on PBS stations. The film is being distributed by First Light Video.

He has also made numerous well-received short films, which have had extensive play on the festival circuit. Conversation with a Cigarette, a one-man chamber piece starring the well-respected British actor Ian Hart, is about a man facing his greatest enemy: A Cigarette. It premiered at the prestigious Palm Springs Shortsfest and has played over 25 festivals, winning prizes in categories ranging from writing and editing to best audience choice recognition. It will be released as a companion short film on Oscilloscope Laboratory’s DVD release of the indie classic The Hours and Times.

Mama Laura’s Boys (2002), about the oldest blues club in Los Angeles, premiered at the Tribeca Film Festival and was broadcast on PBS. Reality USA (2004), a study of the emotional and geographic landscape of America, was based on work by the noted poet Mark Halliday, and also premiered at the Tribeca Film Festival. Everyone Who Hears This Story Gets Laid (2012), starring noted performance artist Philip Littell, premiered at Outfest and played numerous other festivals on the LGBT circuit.

He is a member of the Writer’s Guild of America and is a Film Independent Producing Fellow. His films are included in the UCLA Film and Television Archive.

Russell also dedicates a significant amount of time to philanthropic efforts. He is the Founder and Board Chair of the Friends of Residential Treasures: Los Angeles (FORT: LA), a non-profit dedicated to promoting stronger civic identity and community cohesion among the residents of Los Angeles County by advancing scholarship and facilitating wider exploration of our architecturally significant residential homes. In the past, he provided support to hospital patients across Los Angeles as a certified animal therapist with Love On 4 Paws. He also served as the organization’s fundraising coordinator. He has also served on the board of the Los Angeles Zoo and was awarded a commendation from the City of Los Angeles for his work with the Boys and Girls Club of Venice.

A Phi Beta Kappa from the University of Southern California’s Film program in 1998, he held creative executive positions with Laura Ziskin Productions at Columbia Pictures and Saturday Night Live Studios at Paramount Pictures. Russell is a long distance runner, swimmer and triathlete.